TIMES OF ‘MASS’ AT EBRINGTON

When a horologist was invited recently to look at the Ebrington Turret Clock he concluded that the rare verge mechanism, which pre-dates the pendulum as a regulator, was indicative of a very early and exciting example of church timekeeping. However, when leaving the church through the main door, his excitement level increased markedly when he noticed clear evidence, which we had never noticed, of  early ‘scratch’ and ‘mass’ dials carved into the outer wall.

Mass Dials and Scratch Dials are medieval, dating between 1100-1600. Dials are usually found on the south walls of churches, as at St. Eadburgha’s, near the main door and about four to five feet above the ground. It is supposed that they were made and used by the clergy to show the time when the Service would start.

Our, almost entirely weatherworn, Scratch Dial is about 8 inches long, crude and very roughly cut; the Mass Dial, which is smaller but more distinct and precise looking, is in what we now know as a typically Gloucestershire semi-circle of incised dots. Opinion suggests that these were advertising Service or Mass times at Ebrington and date from around the 13th – 14th century. 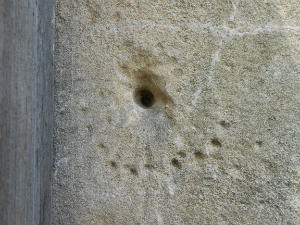 The gnomon of both of our dials is inevitably missing [the picture here is of the Mass Dial]; they would have been made of wood anyway. When functioning, they pointed straight out horizontally and so the dial would not record the same hours at all times of the year. The Mass Dial is any case is usually regarded as an event marker for the church services rather than a time piece.

To understand the origins of these dials it is necessary to go back to Saxon Dials which were skilfully carved in relief; these mediaeval copies are significantly cruder and reflect the ‘darker’ era of the time.

Dials are almost uniquely now evident in older English churches; because of re-building over the centuries these may now appear anywhere; on an inside wall, or even inverted.

At Ebrington the largely 19th century practice of carving initials and messages in the stonework adjacent the door may even have obliterated other dials, or possibly vertical grooves for arrow sharpening, intended maybe to bring luck to the archer. It is worth looking to see “SK” carved in capital letters with serifs; very near one of our dials [could this have been a Samuel Keyt?]

Now our interest has been spurred, by a chance visit, it can be seen that there is plenty of near forgotten local ‘history’ to be seen carved in many of our church walls and arches. Come and have a look, but please leave small chisels and other sharp implements at home. There are now so many other ways in which you can “make your mark”.