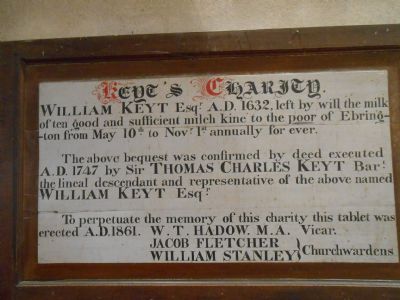 This tablet on the wall by the south door commemorates the unique KEYT'S COW CHARITY.

A bequest dating from 1632 was made by William Keyte whose Will stated that 'the milk of ten good and sufficient milch kine to the poor of Ebrington from May 10th to November 1st annually forever'.

The milking was so arranged that two families shared the milk of ten cows every tenth day.  The bequest was confirmed by a Deed executed in 1747 by Sir Thomas Charles Keyte, Baronet, lineal descendant and representative of the original donor.

However, milk rationing in the 1939-45 War made the charity difficult to administer and in 1952, by general consent, it was commuted and transferred into a money trust which exists to this day.

The Vicar and Churchwardens are among those appointed as Trustees.

We thank people who generously make donations to the Charity Fund - this can be done via the church giving page to the church Bank Account - marked for the benefit of the Cow Charity.